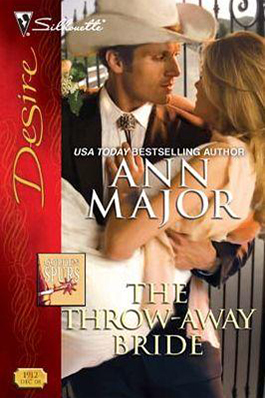 Abby Collins wasn't in the habit of having one-night stands. Especially with strong but staid ranchers like Leo Storm. Their night together had been wilder than she'd ever imagined, but it had consequences that Abby hadn't bargained for. She was pregnant…with Leo's baby. He'd asked her to marry him—said it would make things easier. And while marriage to a wealthy CEO would make some women swoon, Abby really only wanted for her and her baby to be loved. And that was the one thing Leo might not be capable of...

Predictable Leo Storm had seemed like a safe choice.

When you go to a bar on the rebound intending to dance with a wild cowboy or two, and you end up sleeping with the dullest, safest, most-buttoned-down guy there—your next-door neighbor of all people—you don't expect earth-shattering consequences… in his bed or afterward.

Abigail Collins's eyes burned, and not from mucking out her horse Coco's stall. She was suffering from a bad case of Poor-Me Syndrome.

Apparently Leo hadn't read his CEO rule book on said subject. His skill and enthusiastic ardor as a lover had made Abigail's toes tingle and her bones melt. She'd opened herself to him in ways that had caused her to despise herself and blame him the next morning. They'd done it so many times, she'd been tender for days. Needless to say, she'd avoided the heck out of him ever since.

So, the discovery that she was pregnant—by Leo— sucked big-time.

You can have anything you want—as long as you're willing to pay the price, her mother used to say. Trouble was, the price was due, and Abby didn't want to pay.

Ever since she'd found out about her condition last week, she'd been wallowing in self-misery—not that she was proud of such childish behavior.

As soon as she'd gotten up this morning and had finished going to the bathroom, desperation had overwhelmed her again, and she'd flipped the toilet lid down and collapsed on it, sniveling like a baby. A little later she'd had another good cry while knocking her forehead against the wet tiles of her shower.

As if buckets full of tears or regrets—and don't forget whining—did any good. Some things just had to be faced.

She was a control freak and single with no desire for a long-term alliance of any kind after being hurt so badly when her boyfriend, Shanghai Knight, had dumped her.

Since puberty she'd gone for short-term relationships with cowboys like Shanghai; not for boring, bossy, calculating, corporate, money guys without souls like Leo. She'd been the brains, and the cowboys been the brawn.

She licked her lips and wiped the sweat off her brow. Well, she wasn't going to cry again. No use indulging in any more pity parties. She was a big girl—whether she was acting like one or not. She could handle this. She had to handle this.

Which was why she was telling Leo today. Surely she'd feel better once that was behind her. She closed her eyes and tried not to think about Leo's white, drawn face and blazing black eyes the last time she'd seen him. He'd been furious at her. Not only furious—he'd said he was through with her.

Usually being in the barn with Coco, her gentle palomino, soothed her. Not today. Not when she dreaded driving into San Antonio and telling a certain stubborn, macho CEO, who was now refusing to take her calls, that they had a little problem.

Every time she bent over to scoop another pitchfork load of manure and dirty straw into the wheelbarrow, the zipper of her jeans slid a little lower, reminding her of their mutual problem and that night, that one night with him that she'd tried so hard to forget.

Not that he'd wanted to forget. He'd made it very clear he'd wanted her—again and again. He was nothing if not determined. He'd called her both at home and at her office. He'd dropped by, but finally when she'd rejected him for about the tenth time, he'd become so angry he'd issued his ultimatum—which she'd ignored.

Having rid himself of her, he wouldn't be happy to learn that that night was now every bit as impossible for her to forget as it had been for him.

Heaving in a breath, she rested her pitchfork against the wheelbarrow and tugged her zipper back up. She was panting by the time she'd managed it, so she didn't even try to snap the waistband. The jeans had been tight when she'd bought them, but since she'd planned to take off a couple of pounds, she hadn't worried about it.

No chance of losing those pounds anytime soon.

As she stooped to pick up the pitchfork, the cell phone in her back pocket vibrated against her hip. She threw the pitchfork back down hard, and it stabbed a mound of hay so violently that Coco, who was just outside the stall, danced backward, her hooves clattering on the concrete floor.

Oh, God, what if her big darling slipped because of her thoughtlessness?

"Easy girl," she whispered, her tone gentle even as the stench of straw and urine and horse in such close quarters caused nausea to roil in her stomach.

She hoped against hope that Leo had relented and was returning her call like a reasonable individual. Maybe he'd even agree to stop by her ranch house tonight to talk. Much as she would dread seeing him, it would be so nice if she could avoid the drive to San Antonio and the humiliation of fighting her way into his office after he'd made it clear he never wanted to see her again.

Not that she could blame him for that. Her heart knocked as she remembered accusing him of not being able to take no for an answer and of stalking her. He'd hissed in a breath. But she'd seen the acute pain in his black eyes right before he'd whirled, pitched the roses he'd brought her into the trash and quietly walked back to his truck. Later he'd called her and had delivered his ultimatum, which, for some weird reason, she'd replayed at least a dozen times in her mind. Did she enjoy suffering or what?

Instead of Leo's name, the number of In the Pink!, Abigail's own company located on a side street just off Congress Avenue in downtown Austin lit up the blue LED of her mobile phone.

Kel, her executive secretary, best friend, unpaid therapist… and of late, her number-one shoulder to cry on, was calling.

Abigail sagged against the wall of the barn. A tear rolled down her cheek as she caught her breath. Then she swallowed and squeaked out a hello that she'd meant to sound chirpy.

"Hey, Abby, do you have a cold or something?"

"Or something." Abigail felt frozen. "This thing has me all messed up."

Or the terror of Leo Storm, of what he would say and do to her this morning at her news, especially after the way she'd treated him.

"Other than feeling like I'm about to have a nervous breakdown, I'm fine. Never better." Somehow she managed a hollow laugh. "As fine as someone with morning sickness can be, mucking out a stall… before they face a firing squad."

"You need to hire somebody for that yucky-mucky stuff now."

A city girl through and through, Kel didn't get horses.

"So, anything I need to know before I start scheduling your day?"

"Putting it off is driving me crazy. The only problem is it looks like I'm going to have to track him down. He won't return my calls."

"You should have listened to your smart secretary. Didn't I tell you, you should call him and apologize—"

"Okay. Well, I didn't call him back or apologize. And ever since, he's avoided the ranch and me. Now he won't even take my calls or call me back."

"Why are we surprised?"

"I said it was urgent. I've left several messages with his secretary, too. Yesterday, she actually got snappy and said he had no intention of returning my calls. I can't tell you how humiliating that was. I'm not about to tell a witch like her to tell him I'm pregnant with his child, so I guess I have to drive over there."

"After lunch. I'll probably be a basket case after seeing him."

"Do you want me to cancel your afternoon?"

"Is there anything I can do?" Kel's voice was soft with concern.

"Just be your smart-assed self and put out any and all home fires."

Abigail's hands began to shake again as she slid her phone in her back pocket. Compulsively, she began marching back and forth in the barn, straightening tack that didn't need to be straightened, lining up bottles and brushes on shelves, trying to feel she controlled something. She got a broom and began to sweep the feed that Coco had shaken out of the feed sack when she'd grabbed it by her teeth earlier.

Coco walked up and lowered her head almost apologetically. It was her way of begging for her favorite treat, a mixture of oats and molasses.

"Not today, big girl. Not after this big mess you made!"

Setting the broom against the wall, Abby pushed the wheelbarrow full of dirty straw outside the barn and up a small hill where she dumped it before heading toward the house. Coco, who adored her, trailed behind her in the hope of being stroked or fed, but Abby was too distracted to notice her as she usually did.

Even though Abigail had taken the pregnancy tests a week ago—three of them—she still couldn't believe she was in this mess. She was a businesswoman, an entrepreneur with a staff of forty, the owner of her own ranch. Make that a ranchette. But still… she was la capitana of her ship! Even if she'd sailed headlong into the rocks.

She reached into her pocket and pulled out her phone. Quickly she scrolled down to Leo's cell number and punched it. Once again she listened to it ring until his voice mail picked up. So, he still refused to answer. She flipped her phone shut and began to pace.

So what else was new? She'd watched him screen his calls, so it was easy to imagine his black eyes grimly eyeing her name before his jaw tightened and he thrust...