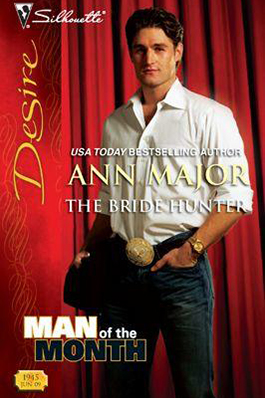 His Target: The elusive heiress

His Assignment: Pursue and recapture his bride

He'd made the mistake of falling for, lying to, then marrying Anna Barton, the woman he'd been hired to find. And then she fled. Now Connor would need more than money to bring back his runaway wife—and their baby!

His original plan hadn't included a family, but once he lassoed Anna, he intended to keep her…for better or worse.

MAN OF THE MONTH: Love is bound to strike him on the infamous Golden Spurs ranch!

His large body humming with tension, Connor Storm fixed on his prey. The woman, who went by the alias Anna Barton, had eluded his top investigator. Now she was sipping the coffee she'd just bought at the kiosk behind her. Connor was trying to keep out of her line of vision by standing behind a pillar while they both waited for their plane to be called.

Her face was fine boned, her shiny hair dark blond and shoulder length. He liked long hair. He didn't like the fact that he was suddenly imagining his big hand grasping her thick mane and pulling her closer.

Damn. First time since Linda he'd thought like this about a woman. He must be coming back to the land of the living.

This is a job. For Leo. You owe your big brother. There are a lot of other fish in the sea. Yada, yada.

At five foot seven, his target was slim and athletic—and very pretty.

Their plane was an hour late due to bad weather. He glanced impatiently at his watch and out the large window again. The snow had let up. He could see the end of the runway now.

A woman's voice came over a loudspeaker and announced their plane would be boarding at Gate 10 instead of Gate 14. The crowd in the Gate 14 waiting area stood up and began gathering briefcases and laptops. Anna Barton jumped away from the kiosk as fast as a bird taking flight and rushed toward their gate.

His cue to pursue and capture.

Planting his Stetson firmly on his blond head, Connor Storm charged after her, his boot heels ringing so loudly on the airport terminal floor that she whirled, her hazel eyes wide with alarm.

Perhaps on the lookout for the creepy boyfriend who'd been stalking her?

"Hey, miss! You'll need this if you want to board that flight anytime soon!" he yelled.

When the elusive woman he'd been paid so much to find stopped, Connor froze midstride.

Distrust was written all over her. Her gaze traveled the length of him before flitting away. Connor was suddenly glad he'd taken Sam Guerra off this assignment and come himself.

Her tall, slender body fairly shook with tension. Clearly she still didn't trust strangers, especially if they were broad-shouldered men who could easily overpower her. Her boyfriend, Dwight Crawford, must have been an even worse nutcase than his P.I.'s reports had indicated.

Connor tipped his Stetson back and attempted one of his easy smiles.

He broadened his grin. Then he flapped the boarding pass he'd removed from her purse while she'd been too busy counting change to buy coffee.

"I was behind you in line when you dropped this," he lied, feeling only a slight pang of guilt at his easy falsehood.

He was a private investigator. P.I.s had to make stuff up in the line of duty, right? They had a nice word for it, too. Pretext, they called it.

Her face remained pinched, her eyes wary. He'd had his guy on her tail for a while. Every time he had gotten close, she'd run, changing her identity.

Her creamy skin was pale and looked so soft, Connor wanted to touch it. Damn, the pretty factor was becoming a problem.

This was a job. For Leo, he reminded himself.

Her big, slanting eyes seemed so vulnerable and scared, he had half a mind to track the boyfriend down and teach him a lesson. A woman who'd gone through what she had as a child didn't deserve some slimeball like Crawford scaring her again.

She lifted her nose. She was slim and statuesque. She had class. With her heritage, he'd expected no less. In Texas, anybody connected to the Golden Spurs ranching empire was royalty.

His job was to take her home. Period.

Funny, how she wore her hair down just like Abby did. He'd read separated twins did stuff like that. Still, the start-lingly similar hairdo made her look so exactly like his brother Leo's wife, Connor drew in a sharp breath. Not that he should have been surprised at the resemblance—after all, she was Abby's long-lost kidnapped twin.

What was strange was his powerful reaction to her. Hell, he'd never felt blistering heat when staring into his sister-in-law's eyes.

At the name, Anna shivered. Her big, haunted eyes widened.

"Sorry," he said. "Right. For a second you looked like somebody I know."

"You're Anna Barton, and you're not going anywhere without your boarding pass."

Maybe she wasn't listening, because she turned and marched quickly toward their gate.

"Anna Barton!" he yelled after her.

She speeded up, so he sprinted, catching her in two long strides.

"Anna! Anna Barton!" When she still didn't stop, he grabbed her arm, maybe a little too forcefully, because when he spun her around, she toppled straight into him, her paper coffee cup flying out of her hand.

Other passengers turned to stare. Fortunately, no security guards were nearby.

"Sorry about that," he said, his voice muffled against her hair. His grip loosened. "I owe you a cup of coffee."

In those seconds that he held her, he felt the heat of her slim body squirming against his own, smelled the floral scent of her perfume and the soapier, sweeter fragrance of her shampoo. Her hair felt like silk against his mouth. The urge to coil a length of it around his fist and pull her even closer was becoming way too strong.

A twist of his head brought his lips mere inches from hers. When he found himself staring down at her lips, his heart raced.

"You are Anna Barton?" he growled huskily, holding up her boarding pass.

Reading her name, her wide eyes accused him. Then she snapped it out of his fingers and shoved it into her purse. "Why did you call me Becky a while ago?"

"A thank-you would be nice."

"I asked you a question," she said.

"Well, I'm not her. I've never seen you before in my life, and I'm not in the habit of making friends with strange men in airports—so, would you please let me go… and leave me alone."

It wasn't a question.

"Sorry. Sure. Just trying to help."

Her eyes were blazing now, and a rosy flush lit her cheeks. The longer he held her, the hotter her body felt against his, so hot he wanted to pull her even closer, to taste her, to kiss those lips that looked so moist and inviting.

Her gaze was fixed on his mouth, too. She seemed to be holding her breath.

With a sigh of what sounded like longing, she tore her gaze from his mouth and shoved at his broad chest.

Reluctantly, he let her go and held his hands up in mock surrender.

She straightened her long sleeves and smoothed her hair. Then with a parting scowl, she left for the gate.

Great hips. Great swing to her walk. But bouncy, too.

This is a job.

He wished he hadn't grabbed her because he needed her trust, to convince her to come back to Texas with him.

So what would it take now to get her to Houston?

Whatever it was, he'd do it. Anna Barton was Leo's sister-in-law. Leo's wife was heartbroken about the role she'd played in her twin's kidnapping when they'd been kids. She believed Leo could and would find out what had happened to her missing sister. As a result, Leo had turned to Connor and had put the same kind of pressure on him.

"Find her. Forme. ForAbby. She'll never rest easy if you don't," Leo had said. "It's like a piece of her is missing."

Leo had raised Connor after their mother had died. Connor owed Leo everything.

This wasn't a job.

This was family. And nothing mattered more.

The stewardess announced that the plane was full and asked passengers to take the first available seat.

"Hello," Connor said, smiling broadly down at Anna. She was pretending to be absorbed in a SkyMall catalog. "Mind if I take the aisle seat beside you?"

Without looking up, she frowned. Silently, she scooped her purse of the seat and shoved it under the seat in front of her.

He took his time placing his Stetson in the overhead bin before he sat down. He was so large, or the seat was so small, his shoulder brushed against hers, and once again he felt her body heat, which was surprisingly high voltage, since the place felt like an icebox. Hell, she all but shot off sparks every time he touched her.

"Who are you shopping for so diligently?" he asked.

Ignoring him, she flipped a page.

"You one of those people who hates to talk on a flight?"

She flipped another page, this one more noisily than the last.

"You must be like me. Usually, I have a thirty-minute rule when I sit by someone I don't know on an airplane. I never start up a conversation until thirty minutes before we're supposed to land. That way you don't get trapped."

Still, she didn't say anything. He thought maybe he should stop pestering her. Then he saw her lips twitch at the corners.

"Do you have that rule?" he whispered, bending so his breath stirred a tendril of hair against her temple.

She sighed, which made him think maybe he was having some luck after all.

"Who dreams up all those crazy things in catalogs… I mean to tempt weak consumers like me who suddenly find themselves longing for a self-cleaning kitty litter box when I don't even have a cat."

"You could stick to your rule and read your own catalog, you know," she said.

She pointed to the seat in front of him. "There's one in every seat pocket."

"It's way more fun reading yours."

"I can't imagine why," she said, blushing.

When she looked up into his eyes, he suddenly felt too warm to wear his sheepskin jacket, so he shrugged out of it. He couldn't believe it when her slim fingers tugged his sleeves down for him, and just that light touch was a tease.

Then she jerked her hand away.

"Thanks," he muttered in a tight, low tone.

"No problem," she said, so sweetly he wondered if she realized she was getting under his skin, too.

The pretty factor coupled with the voltage factor was a growing problem. If only he had...