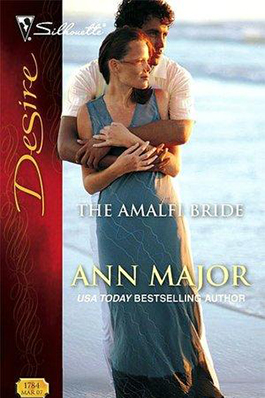 It could have been a fairy-tale romance… but some prices are too high to pay.

The beauty of Italy's Amalfi Coast made Regina Tomei throw caution to the wind-and spend the night in the arms of a gorgeous stranger. Except Nico Romano is actually a prince… heir to a monarchy, destined to marry a woman of royal blood.

Regina has no illusions that a working-class American like herself could fit into his world of power, palazzos and paparazzi. Their passionate affair must end when her vacation does. But Regina leaves Italy with more than just memories… she's carrying Nico's baby!

I laughed. I cried. I yearned. When I read the last word, I smiled. THE AMALFI BRIDE was a truly enchanting read.

Her last few days in paradise, so many sights, so little time left to see them. So, what was she doing here, in a bar, wasting her valuable time, lacking the will to hike or to tour one more cathedral or villa? Flirting with a dangerous stranger?

Oh, my God! I'm not flirting with him.

It was late July and warm in the open-air bar, although not nearly as warm as it would be back in Texas. Regina Tomei grabbed her glass of chardonnay and sipped too much, too hastily, spilling a few drops on her chin and neck. Quickly she dabbed at the dribbles with her napkin.

Her lengthy list of cathedrals and the notes she'd written about the Greek ruins fell to the floor. She didn't bother to pick them up. Instead, she stole another quick glance at the tall, dark stranger leaning against the bar across the room.

Who had said, "I can resist anything but temptation?"

The man instantly stopped talking to his short, plump friend and lifted his bottle of beer in a mock salute to her.

He took a slow, long pull from the bottle. Then his gaze touched her throat and lips. She gasped. Involuntarily, her hand with the napkin went to her mouth and then to the hollow of her throat, where her pulse was racing.

The heat of her own fingertips made her imagine his big hands and his lips upon her flesh. She began to perspire, so she fanned herself with the damp napkin.

Then, realizing what she was doing, Regina seized the ornate golden cross around her neck and held on for dear life. She'd bought the necklace from Illusions, an opulent shop she'd discovered tucked away in an alley of charming Ravello near her hotel.

Sightseeing and shopping were her hobbies; not barhopping, not flirting with strange men in foreign lands.

The man took another pull on his bottle and then stared at the gardenia in her hair. Before she could stop herself, she grazed the velvet petals with a stray fingertip.

Do not touch, signorina, or the petals will turn brown. Regina picked up her camera and set it on her little table. Agitated, her hands flew to her lap, where she clasped them and her napkin, but not for long.

She looked up again, straight at her Adonis. Was it only her imagination, or did his blue eyes blaze with the same intensity as the sapphire Gulf of Salerno behind him? Was she the cause of all that fire?

Heat washed over her and, at her blush, he smiled. Mortified and yet thrilled, too, she picked up her camera and pretended she found her light meter fascinating.

His friend observed all with a raffish grin and then, as if bored, hugged Adonis goodbye.

Oh, my God! The short guy was leaving! He would have to pass by her table!

She buried her face in her hands to avoid conversation, and he chuckled as he passed.

Somehow, the friend's departure seemed significant. Not wanting to think about that, she concentrated on the glitter-ing rings of condensation on the ceramic table from her wineglass.

Rule number one: smart women traveling alone in foreign countries do not pick up strange men, no matter how handsome or friendly or desirable they seem. In particular, women don't pick them up in a bar, even one with whitewashed walls, cascad-ing bougainvillea and lots of sunshine and tourists.

She told herself to grab her camera, get up and walk away! No! Run! She should run like she had last night. She had no idea what sort of person he was.

What if he was a gigolo or, worse, a serial killer?

Her mind returned to the G-word.

A gigolo? Was the blond fellow a pimp? Did gigolos even have pimps? She could write a brief on what she didn't know about gigolos and their business plans.

Regina frowned as she remembered the older woman with the platinum hair, loud makeup and trailing orange veils with whom she'd seen him yesterday in the red Maserati convertible. The woman had caught Regina's attention because she'd spotted the car in front of Illusions earlier.

The driver had been the same elderly shopkeeper who'd sold her the cross, the sentimental little painting of the black-haired boy playing in the sand, the scandalous pink-and-black lace underwear she was wearing now, her skimpy new dress and, of course, the darling white sandals to match.

Yesterday afternoon, when the older lady had dropped him off at the beach near the mooring of the immense white yacht called Simonetta,Regina hadn't thought much about her kissing his dark cheeks so many times. Nor had she wondered why the older lady had been so reluctant to let him go. When the woman had spotted Regina watching them, she'd recognized her and had waved, beaming. When he'd looked at Regina, he'd acted startled and had broken off the embrace.

Suddenly, the little scene took on a darker, more lurid meaning. A gigolo?

And what about that diamond the size of an ice cube on the finger of the regal, middle-aged woman in the black Ferrari with him today? She, too, had driven him to the same beach and had kissed his cheeks almost as ardently as the other, older woman. Only the second woman had had a more commanding air, sum-moning him back to the Ferrari twice.

Now, the stranger's eyes on Regina's bare skin felt like fire. She wished she'd put on something that was more her.

Regina's usual attire back in Austin, Texas, tended to be dull, predictable suits that covered her up, which were appropriate when a young woman was an attorney and made her living in courtrooms.

How ironic that his elderly mistress or client, or whoever the woman was, had sold Regina her revealing white sundress. The same woman had talked her into taking the clips out of her hair, too.

"You very lovely, signorina. With wavy hair down. You need flower in your hair. Special flower from magic bush. Then you get boyfriend for sure. Come. I show you."

Was it so obvious Regina had no lover? No boyfriend? tuous and hidden bells jingling, the woman had led Regina out of the shop down a cobblestone path to a courtyard with a marble statue of Cupid and a thick bush ablaze with gardenias.

"This bush blooms all year. Pick one every day you are here, if you like. And I promise, a miracle will happen. Prometto." Her dark blue eyes had twinkled like a fairy godmother's.

Delighted, Regina had picked one yesterday. Then, this morning, she had gone back for another.

The gulf had a mirror finish; the sinking sun was turning to apricot the villas and hotels that perched precariously on the cliffs. Soon the coast would be magically suffused by the soft, slow twilight she'd come to love.

For as long as she could remember, Regina had wanted to visit the Amalfi Coast. Leaning down, she picked up her list of sights and notes. She should be admiring the mountains trembling steeply above the sea instead of devouring a man who could be a sexual professional.

You probably couldn't even afford him.

If he was a gigolo, he obviously thought she could afford him. Why else was he eating her up with his dark blue eyes?

Her throat went so dry that she gulped more chardonnay. Gigolos were losers who preyed on older, lonely women; def-initely not part of her life plan. She should be shocked to the core by her train of thought.

Afford him? She should indict him!

In Austin, she had a reputation for being prim and proper family, understood how strongly she had to focus to accom-plish her goals.

"You're a control freak and frigid!" Bobby had accused after she'd stunned them both, herself and him, by rejecting his marriage proposal.

"Give me my ring!" He'd bruised her finger when he'd tried to pull it off. "Even though you chased me for a whole damn year, you probably did me a helluva favor."

"I chased you? I gave you my card at a party because I wanted to work for your father's firm."

"Just my luck! He hired you! You may be a good lawyer, but you're one lousy lay." He shoved his chair back and slammed out of the door of their favorite sushi restaurant, leaving her alone with a huge wooden serving dish filled with eels and shrimp and caviar, zero appetite, and the bill.

A lousy lay? Okay, so, yes, she had faked an orgasm or two. But only to make him happy.

What if a talented gigolo was able to teach a motivated student a few naughty tricks and make her sexier in bed?

Susana, her flaky, younger sister had tried to console her. "You're going after the wrong type. I never liked Bobby anyway.

Who wouldn't have to fake orgasms with a man who never thought about anything but billable hours? Just a word though, maybe you should try being more intuitive. And maybe you shouldn't boss guys around so much."

Susana, a housewife, who'd stolen Joe, the one man Regina had loved, had had the gall to give her advice. How had Susana, a college dropout, become the successful sister?

Hello! Susana had given their folks three darling grandchildren. "I'm not that bossy." "Well, don't let your boyfriends see all those lists you make." "I just like to get things done," Regina grumbled aloud to the voices in her head as she crumpled another napkin and wiped the condensation rings on her table.

She was sitting as far as she possibly could from the sexual professional, if that was indeed what he was. Too aware of his satiny black hair and flirty eyes, she tidied up her table, slipping a fresh napkin under her wineglass. Still, just knowing he was over there, alone now, had her pulse beating like a war drum.

Most of her girlfriends had shocked her by sleeping with strangers at least once, and then describing their sexual misad-ventures in vivid detail over long lunches. But that lifestyle hadn't been for Regina. She'd always known she'd wanted to love and marry a respectable professional man, and she'd accepted dates only from men who met her criteria. She had a long list of criteria.