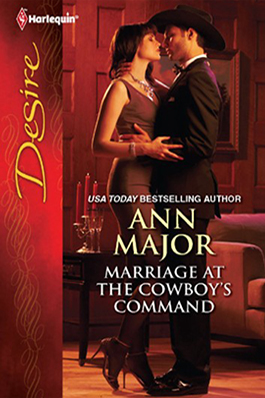 Marriage at the Cowboy's Command

When London billionaire Luke Kilgore returns to Texas as a favor to his honorary father, Sheik Hassan Bin Najjar, to deal with Caitlyn Wakefield, the girl he left behind, he meets her young son and discovers that she’s not all he left behind.

The last thing he wants to do is marry the woman whose rejection fueled his single-minded ambition.

The last thing an independent rancher like Cait wants is to sell herself in a marriage of convenience to the man who stomped all over her heart and left her—even if sparks still fly every time he looks at her. And yet….

Major takes what could have been a mundane tale and ramps it up with spirited characters that evolve and grow as the story reaches its peak. (4)