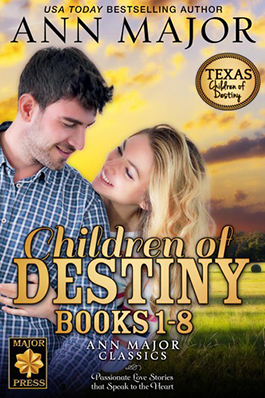 You won’t want to miss these seven poignant reunion stories that include all the novels except Book 7 of her Texas: Children of Destiny series. (Book 7 is currently available by Harlequin.)

When his son’s life is threatened, Nick returns to claim his wife and child. But can their love survive his sins and her secrets?

Ever since Megan MacKay’s father lost the MacKay ranch to neighboring rancher Jeb Jackson in a card game, Megan MacKay resented Jeb almost as much as she desired him.

Now she’s all grown up and such a handful, his feisty pilot is the last woman Jeb wants to desire. Too bad for him a passionate kiss makes him realize he wants to possess her even more than he wants her land.

When world-famous ballerina Dawn Hayden is abducted and a mysterious stranger, who seems dazzlingly familiar rescues her, passion flames and old memories are triggered.

Who is Kirk MacKay? What is he hiding? Why won’t he tell her what happened to her in the past?

Passion and old betrayals meet in a conflagration in the Australian wilderness when a transplanted Texas cattleman’s old love walks into a trap he’s set just for her.

Noelle will do anything to gain Garret’s forgiveness for her past mistakes, and even more to help his son. Does she have a second chance, or is it already too late?

Saying goodbye to Raoul Girouard eight years ago to please her wealthy family was the hardest thing Eva had ever done. Now he’s back, more dangerous than ever. Because of him her life’s in jeopardy, and he’s her sole protector. When she’s safe again, can she say goodbye a second time to the only man she’s ever loved?

Not included because this work was already published as an e-book by Harlequin. You can find it on your favorite retailer’s web page.

When Passion and Fate Intertwine in this gripping romantic mystery suspense novel, will two Lost Souls get a Second Chance at True Love?

After a woman with a tragic past is struck by a runaway cab, she gets a brand-new face. Unfortunately, there is a string attached: a pretend marriage to a sexy, Texas cowboy husband. Jack West is dead-set against her no matter how much he desires her. Or is he?